Vicky Kaushal and Katrina Kaif’s wedding was everything that was talked about all over in recent times and when they finally got married to each other, the internet can’t stop gliding over them as a couple.

They both had been rumoured to be dating for more than 2 years now. During this period of time, both of them were seen giving individual appearances in the tv shows for promotions of their projects and together in award and chat shows. They were actually always hinting about their relationship but it was just the audience that didn’t take it seriously.

Do you remember how they interacted in an award show, or in a talk show where they both were talking to each other related to their lives so far? Might be yes and probably no. But if you remember then we are very sure that you hadn’t taken the hints given by the couple at that time.

Why miss it now when they are married? Read the article and relive the moments they were seen drooling over each other in recent times.

Karan Johar, in his show in 2018, asked Katrina about who she would work and look good with? The reply was ‘Vicky Kaushal’. And when it was told to Vicky, when he came as a guest later, he was extremely flattered hearing that and revealed that he had a crush on Katrina Kaif.

In an award show, Vicky was anchoring when Katrina was on stage, suddenly he asked her to find and marry some ‘Vicky Kaushal’. The reaction and blushing cheeks of Katrina Kaif were everything to watch out for next.

During a talk session between Katrina Kaif and Vicky Kaushal, the latter revealed that he used to dance on ‘Teri Ore’ imagining that the camera was Katrina Kaif. And if reports are to be believed then this was the same song the couple danced on at their Sangeet Ceremony from the wedding. Also, not to forget that Katrina Kaif used to be Vicky’s crush at a point of time.

It is obvious to wear your Boyfriend’s hoodie being in a relationship and Katrina Kaif has done exactly the same. Vicky Kaushal and Katrina Kaif were probably seen donning the same hoodie in different pictures but it was enough to let us know that something is cooking.

Oh My God! This is totally wholesome. Katrina Kaif shared an IG story way back where she went to have a butterfly filter over her face. She was resting her head over someone’s chest and if the below shown t-shirt in the picture is to be believed then it was Vicky Kaushal for sure. Remember, If You Are In Love, Then You Would Notice Butterflies Fluttering In Your Stomach, can we just believe it for that moment?

He was on a promotional tour for his then-released film but who knew he would be asked this question in the talk show by comedian Kapil Sharma. And just when it was asked, Vicky Kaushal’s long lasting, full of blushing, smile was to be captured solely.

Karan Johar did it once again. First of all she was all cheered up when she saw Vicky on-screen in Kapil Sharma’s show and then suddenly when Johar said that ‘Katrina Ke Ghar Mein Sab Kaushal Mangal Hai’, this was just the end of the world of love. Oh Yes, she was reddened and went puzzled after hearing this.

During the Film Companion’s interview when Katrina Kaif was talking to Vicky Kaushal, he was just giving a hard core blushed smile to her and that was totally priceless. The way he was looking at her, the pure feeling of love was being reflected in his eyes and smile.

At an award show Katrina asked Vicky to remake his dialogue ‘How’s The Josh’ from Uri and he was all zoned out by saying that many biggies have asked him to do so but that time it was Katrina Kaif. After this, Katrina Kaif was to be looked at when she alongwith Vicky was totally blushing.

The now-official couple were on a date night in 2019 when it was the headlines all over, but we did not get so deep that one day that rumoured couple would be officially husband and wife now. Isn’t this the perfect and the cutest date night ever?

News of them getting engaged and rokafied during the time of Diwali were rounding and we believed it to be false later. But it wasn’t that false if we think of the current situation. Where we were thinking that both of these pictures are from separate events and places then we are wrong perhaps.

Meeting each other on the sets of a show and saying ‘This Is A Great Place To Meet Each Other’ and of course when Vicky said, ‘Did You Ever Imagine That We Are Gonna Sit Across Each Other And Talk About Each Other’s Lives, Will Be Recorded!’. This was what striked our minds and forced us to smell a rat.

Katrina’s sister Isabelle Kaif posted a story of her and a friend months back, but VicKat’s fans noticed something else. It was Katrina Kaif and Vicky Kaushal’s reflection in the mirror sitting at the opposite side of Isabelle, only a few spotted the couple in the pic and that was something just awesome to look at.

So do you now believe that all these times Katrina really had everything Kaushal-Mangal in her life? But we just took it lightly and when they are finally married, we have got these hints strong now. 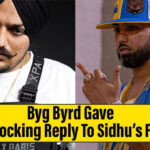