Many Punjabi actresses have proved themselves with their strong roles and movies. But not only in the reel, but in real life also they have shown and stimulated us in many ways. It’s no secret that Pollywood is a male-dominated industry and has many regressing values attached to it. Today, we are looking up to the women who shielded themselves well and inspired us to be like them!

6 Times Pollywood Actress Taught Us To Stand For Ourselves

An inappropriate video of Punjabi actress Mandy Takhar was doing the rounds on the internet and the actress had stepped up to speak about it. While the video went viral, first she filed a cyberbullying case against it and then took to social media and shunned the trollers for the same.

Being in the limelight has both pros and cons. On one hand, where you get the love and attention of your fans, on the other hand, you become an easy target for hate and trolls. And Neeru was one who gets trolled for having three daughters, but the actress never misses any chance to slam her trollers. She is a proud mother who has three daughters.

Simi Chahal who was once seen sharing pictures of her weight gain phase of life, faced trolls regarding her body size. But the actress took to her social media handle and was vocal about her struggle with weight gain. She has been suffering from PCOS since 2020. There was a point in her life when she was put on birth control pills. The actress motivates everyone to read and acquire some knowledge on PCOS.

Whether it’s Bollywood or Pollywood, it came out that the industry is full of male dominance. But few could come up and speak against the same. And Isha Rikhi doesn’t stay away, she revealed that though she is highly attractive, she is unable to act on TV. People judge her abilities without understanding that she hasn’t been given plentiful inflexible work in which to prove her worth, she said. While male actors have an easier time fitting the top parts, female performers have to work harder to break into the field.

Online trolling is distressing and can really lower your confidence. But Sonam Bajwa always has a better comeback to trolls, and we need to learn from it. Sonam, who has a massive fan-following on social media, unfortunately, became a victim of cyberbullying. She took to her social media to reveal some accounts which created fake chats in her name. Not only this, she lashed out at the people responsible for creating these fake accounts.

Not everyone in the Punjabi industry is open about their relationship status but unlike others, Jasmine Sandlas has been pretty vocal about hers. She was in a serious relationship with Garry Sandhu, but due to some reason the duo broke up and to this, she came out to speak about it openly. Her brave step has literally made us admire her!

These actresses have proved to be strong and amazing not only on screens, but in reality as well. And we are sure, the brave stories of these women are inspiring and motivating for every women out there. 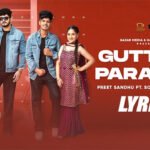