Cricket is not just a game, but a religion in India. There have been many memorable moments in the history of Indian cricket but one moment in particular marked the ignition of this Cricket-craze. Every Cricket fan remembers India’s 1983 World Cup win due to the fact that nobody had expected it. And now the Bollywood movie, “83” is all set to bring the untold story behind one of the biggest upsets in the history of cricket.

The official trailer of the most awaited movie is finally out. Ranveer Singh plays the captain of the historic team, Kapil Dev and our Punjabi superstars, Ammy Virk & Harrdy Sandhu appear in important supporting roles. Ammy plays Balvinder Sidhu and Harrdy plays ace Indian bowler, Madan Lal. The trailer gives a perfect insight to the audience about what they can expect from the movie. One of the most difficult things to do when making films about events that happened in the past, is giving it the perfect representation of that time-period. It wouldn’t be wrong to say that the 83 trailer has nailed it!

The actors have been given perfect looks of the players and you can easily guess who is playing who. Ammy Virk and Harrdy Sandhu have been given respectable space in the trailer. Like most of the Bollywood movies, they haven’t only had a flash appearance in a frame, but a good amount of screen-time. We can also expect the movie to remain true to the statement.

Deepika Padukone has also gone through a complete makeover to get fit in the 1980s, but she looks as stunning as always. We didn’t see much from the match that the movie is all about, India v/s West Indies World Cup Final of 1983, but the little instances we got to see feel fresh and worked on. When a movie about cricket is made, the audience is always looking forward to how the makers present the cinematic representation of various shots, bowling or batting techniques, actions etc. and it looks like ‘83’ team has worked extensively on it.

Overall, ‘83’ is a movie we should look forward to. It is going to be extremely special for the Punjabi audience due to the participation of Harrdy Sandhu and Ammy Virk who are playing important roles in it. Ranveer Singh and Deepika Padukone’s performances are always out-of-the-box and we hope 83 brings the same on the shelf for us. 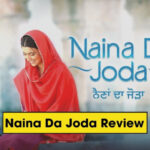