Amrinder Gill has given a surprise to his fans on his birthday and announced his new album ‘Judaa 3’. His album Judaa and Judaa 2 has gained immense love from the audience and now the singer is all set to release the third part. Judaa has been one of the most popular albums of Amrinder Gill, which was released on 5 November 2011. The album won several awards including Best Album at Brit Asia Music Awards and Best Romantic Ballad at PTC Punjabi Music Awards.

Now the singer himself has confirmed the date of the First Chapter of his most awaited album and the updated version of the album will be releasing on 30th August 2021 worldwide.

Along with the first video song, he will release seven audio tracks tomorrow.

Further, Team Kiddaan has already speculated that the album will be released in various parts. Since 30 August has been reserved for ‘Chapter One’ of the album, it might be followed soon by a ‘Chapter Two’ of the album.

Now fans are relentlessly waiting for tomorrow and the expectations are high because the singer never disappointed their audience.

Meanwhile, Amrinder Gill has recently hit the big screens with his film Chal Mera Putt 2. So, if you are planning to book your tickets, you can read the review of the film given below.

Chal Mera Putt 2 Review: This Time It’s A Story Beyond Struggles And Earning 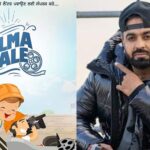