Jaani, who took a social media break just before the release of his debut film Qismat as a supporting character, is now back with exciting news for all of us. The lyricist made an announcement of his upcoming track named ‘Apsraa’ which will be out on the 15th of October.

Jaani is the singer, lyricist, composer as well as musician for this forthcoming song. He is a multi talented star and it is definitely proven by his multi-tasking skills he shows in songs. He is amazingly loved by the audience as a lyricist and now he is slowly turning into a music director too. Video of Apsraa is done by the renowned video director, Arvindr Khaira and it will be released under their own label, Desi Melodies.

This will be Jaani’s third song as a music director after the two previously released songs, ‘Taaron Ke Shehar’ by Neha Kakkar & Jubin Nautiyal and ‘Khair Allah Khair’ by Romanna. The poster of Apsraa says, ‘It’s A Story Not A Song’ and this is just enough to make the public excited. The song will be out before the audience on 15 October, 2021 and we can’t wait to watch this comeback of Jaani after a break.

Is Lyricist Jaani Turning Writer For An Upcoming Punjabi Movie?

Meanwhile, Kaur B and SukhE individually hinted at the project with Jaani earlier. Jaani was last seen on the big screen in theaters in Qismat 2 playing the role of Kabil which was much loved by the audience as he had a special debut character and appearance in the movie.

Qismat 2 Review: The Movies Is An Emotional Ride From Laughters To Uncontrollable Tears 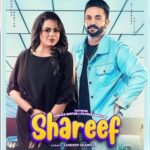