Chhalla Mud Ke Nahi Aaya is the most awaited Punjabi movie of the year 2022. It stars the finest actor in the business, Amrinder Gill in the leading role. With him, we will also get to see actors like Karamjit Anmol, Binnu Dhillon and Sargun Mehta in pivotal roles.

The trailer of Chhalla Mud Ke Nahi Aaya dropped on Sunday and is trending on YouTube. People are loving the film and have set high expectation bars. The trailer of Chhalla Mud Ke Nahi Aaya, a movie based on true events, has been released on Youtube. Amrinder Gill, a normal guy from Punjab, flies to the United Kingdom in search of work and financial stability. He is accompanied by Karamjit Anmol. What follows is a rollercoaster ride that tries to present the hardships that the then-immigrant workers faced in the UK.

And apart from amazing actors, cinematic and directorial excellence and an exciting story, some dialogues from the film’s trailer also grabbed our attention.  We have collected a total of 5 show stealer dialogues from the trailer of Chhalla Mud Ke Nahi Aaya, which will surely win your heart as well.

But before that, if you haven’t watched the film’s trailer already, watch it here;

When Amrinder Gill says this dialogue, his voice sends chills down everyone’s spine. We couldn’t expect it to be any more relatable. It is simple, true, beautifully presented and heart-touching.

The people who have struggled in life to earn every single penny will relate to this dialogue the most. And yes, it is undoubtedly the truth that privileged people can never know the struggles of people who belong to another side of society.

This dialogue is an attempt to highlight how India has been and is still way behind as compared to foreign countries on various basis. Be it dowry, discrimination, pay-scale or any other thing, we are still struggling. And since the story of Chhalla Mud Ke Nahi Aaya is based on past years, their problems must have been double or triple of today.

Also Read: Yo Yo Honey Singh Finally Speaks On Possibility Of Collaboration With Badshah!

This is what is called harassment of labour and this is exactly the theme of Chhalla Mud Ke Nahi Aaya. Labor Discrimination has been a thing for more than the time we can even imagine.

We don’t really have any words to describe the dialogue in any more detail. This is simply heart-touching and beautiful in its purest form.

Now coming to the film’s credits, Chhalla Mud Ke Nahi Aaya is the directorial debut of Amrinder Gill, and its story is written by Amberdeep Singh. It is presented under the collaborative banner of Rhythm Boyz Entertainment & Amberdeep Films and is produced by Karaj Gill.
Chhalla Mud Ke Nahi Aaya is set to release on 29 July in theaters near you. We are not lying, not over-hyping the film, but we are truly waiting for this one. Amrinder Gill has always proved to be the most precious gem of the Punjabi Entertainment Industry. He has served us with amazing movies like Angrej, Love Punjab, and many more. And when he is finally marking his debut as a director also, we have high expectations from both Amrinder Gill and his movie; Chhalla Mud Ke Nahi Aaya. 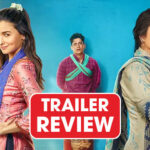 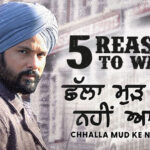