The young and new talent of the Punjabi industry Mohit Middha and Puneet Singh Bedi Aka Frame Singh are all set to mark their names in new fields. Both the directors who have directed many songs are now extending their horizons of entertainment for the Punjabi audience.

Recently they shared the poster of their upcoming project which is touted to be their first Punjabi film. Titled ‘Chaa Coffee’ which is very interesting and unique and has also piqued the attention of the audience. Moreover, the first poster of the film is circulating all over the internet.

Now, coming to the credits, the film will be directed by duo Puneet S. Bedi and Mohit Middha. It is scheduled to release in 2022. The film is produced by Gabbar Sangrur who has also written and directed Punjabi web series ‘The Gangaland in Motherland’. The upcoming Punjabi film will be released under ‘The Theatre Army Films’. Further, the cast of the film ‘Cha Coffee’ is yet not revealed, but we can expect to be out anytime soon.

Moreover, It could be a romantic movie as we can guess from the poster which shows two sides: a village and a city. It can be a love story of a boy who lives in a village and a girl who lives in the city. But we can only speculate till the teaser or the trailer of the film is released. 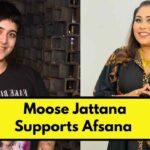