The most awaited movie Chal Mera Putt is finally released in the theatres, and the excitement level of all Amrinder Gill fans was a little too much than usual. Which is very obvious and justified also, because the Punjabi king of silver screen is finally hitting the theatre after a year and half. We have just finished watching the movie, and can say that it was worth the first day first show, because we personally missed Amrinder Gill a lot. Chal Mera Putt 2 stars Amrinder Gill, Simi Chahal, Garry Sandhu, Iftikhar Thakur, Gurshabad Singh, Akram Udas, Ruby Anum, Nasir Chinyoti, Agha Majid, Hardeep Gill and Nirmal Rishi in the most prominent roles.

Where usually in movies, the romantic couple is considered as the leads, but Chal Mera Putt 2 is something else. There was no character that wasn’t good enough that we can consider them as any less than the leads. As it is known that the plot of Chal Mera Putt is the second installment and direct sequel of Chal Mera Putt (2019), the characters remained the same, and so did their charm. But this time, the character which kept us entertained throughout was Tabrez, played by Nasir Chinyoti. Because he is played a prank by his friends which gives you a feeling like you’re involved in there too. The other character which caught our attention was played by Nirmal Rishi, who was phenomenal as usual. And undoubtedly, Amrinder Gill is the cherry on the cake when we talk about actors and their acting skills.

And heading towards the plot of the movie, as expected from the trailer and CMP, it’s based on the lives of six illegal migrants from India and Pakistan, living, struggling and sharing laughter together. It is basically the story of any individual who’s living away from his family, and struggling to get good work and make his family proud. And this is exactly what makes the story and theme of the movie most relevant and relatable. But that doesn’t mean that the story of CMP 2 is all about struggles of migrants, it’s more than that.  It serves you with a tale of amazing friendship, inspiration, a romantic angle and lot’s of emotions too.

While the six friends go through many ups and downs, yes practically only downs in the movie, there is one more person who’s struggling, not financially but emotionally for sure. We are talking about Savy (Simi Chahal), who plays the love interest of Jinder (Amrinder Gill). But very unfortunate is the fact that neither she got enough screen space, and neither was entertained well by her reel life boyfriend Jinder. While she was the one making all the efforts, and helping Jinder and his friends in every possible way, she was also the one Jinder didn’t care about enough. He surely loved her, but it seemed like getting a PR and earning money was all he cared for (and the reason behind it actually unfolds by the end of the movie, which we aren’t going to spoil for you). But we genuinely feel it would have been overwhelming for us, if we were served with more of Simi Chahal.

As the movie heads forward and makes sure that every element is served to the audience, the movie becomes a little boring after the first 25-30 minutes, but again grabs the grip with the grand entry of Garry Sandhu. And believe us, he really had an amazing entry with his superhit song ‘Yeah Baby’ playing in the background.

And there is basically everything on point in the second interval because it is the powerful one which will make sure you’re not hooked on a single emotion for too long. It makes you laugh at various light punches, and does it’s job even amazingly when it makes you cry. Because you won’t realise that you’re crying until your vision is blurred, and a tear drops on your cheek.

Also, we cannot ignore the fact that there are some scenes which will make you question what should be your ultimate reaction. There is a scene I can recall clearly in which all the 5 friends share the same notes (money) to give it to Balwinder as shagun. These scenes will make you laugh and equally emotional because it portrays what friends do for you when you’re in need.

Well, we believe all this is enough to describe that there is a lot in the movie which is going to impress you. But there were some points, which if the director Janjot Singh would have considered, the movie could have been outstanding beyond our expectations. We didn’t tell you why actually Garry Sandhu was there in the UK, but it’s time to spill some beans because he is there to impress Savy to marry her. So, basically Garry Sandhu and Amrinder Gill are the competitors in the movie. And we expected some fun spats between them both, which didn’t really happen. Because earning your love, without some drama, isn’t a love story enough. This surely weakened the love story aspect of the movie, but it was surely surpassed by the one with friendships and inspirations to go on.

At last, we can conclude it with the fact that Chal Mera Putt has impressed the audience but has also left them satisfied and equally curious. Because they released the teaser of Chal Mera Putt 3 and also announced that it will be hitting the theatres soon on 1st October 2021.

PS: Amrinder Gill’s last monologue is hard hitting because it’s something that summarises the entire movie, and describes how it is to live the life of someone who’s away from his family and struggling to live everyday. 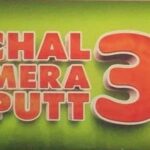