All the fans of Parineeti Chopra and Harrdy Sandhu were more than just excited to watch them share screens in Code Name: Tiranga. The film is going to be high on the action which will be complemented with emotions as well.

The trailer of Code Name: Tiranga has been released on YouTube and we have found it exciting. In the film, Parineeti will be seen in the role of an undercover RAW agent on an international mission. And Harrdy Sandhu on the other hand will be seen playing a doctor and also Parineeti’s love interest in the film.

As the film is going to be a typical action thriller, it will showcase Parineeti Chopra indulging in tough fight sequences, firing shots, and also getting into hand-in-hand fights. And talking about the love story angle, it will be disturbed after Harrdy Sandhu will get to know the lady that he loves is actually someone else and had lied to him about her identity. Though we wish this love story concludes with a happy ending, nothing can be said as of now.

We also need to appreciate the amazing cinematography of the film, as the shots look really appealing and eye-grabbing. We also loved the glimpses of romantic sequences of Harrdy Sandhu and Parineeti shown in the trailer. Their chemistry looks sparkling and we have high hopes for the film.

Another thing which grabbed our attention was the chunk of a romantic track ‘Ki Kariye’. Code Name: Tiranga is also fascinating us all due to its promising star cast including actors like Parineeti Chopra, Harrdy Sandhu, Sharad Kelkar, Rajit Kapur, Dibyendu Bhattacharya, Shishir Sharma, Sabyasachi Chakraborty and Deesh Mariwala.

Earlier the makers of the film had also released a 45 seconds long teaser which was equally good.

Notably, Parineeti’s character in Code Name: Tiranga is also giving us major nostalgia for Katrina Kaif in Ek Tha Tiger and Alia Bhatt from Raazi. Recently in an event, Parineeti addressed the same and stated, “I hope not. There is no similarity because there are two different films. The set-up and the story of Raazi was different, and our story is very different altogether. I am an agent since the beginning and my mission is different as well. I think that not only me but the makers, we have an actor from the same film, I think we are all aware there is no similarity with any film. I feel it is a complete original film.”

Also Read: Karan Johar Breaks Silence On Not Being Invited At Vicky-Katrina Wedding!

Code Name: Tiranga is set to hit the silver screens on 14 October 2022 and will face a major clash with three other movies; Doctor G, Modi Ji Ki Beti and Double XL. 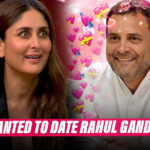