The people who loved Dev Kharoud in Dakuaan Da Munda, the 2018 film, then you have been finally treated with its sequel. Dakuaan Da Munda 2 has been released in theaters near you, and here we are with a proper analysis of the film. If you’re planning to watch the film anytime soon with your friends, consider reading this detailed Dakuaan Da Munda 2 movie review beforehand.

The film stars Dev Kharoud and Japji Khaira in the leading roles. The film directed by Mandeep Benipal also features quality actors like Raj Singh Jhinjer, Nishawn Bhullar and Balwinder Bullet in pivotal supporting roles. It is the second film of the Dakuaan Da Munda franchise and we caught the highlights of the film and the flaws as well.

Dakuaan Da Munda 2 is based on the autobiography ‘Shararti Tatt’ by popular writer Manga Singh Antal, who once was a drug addict and won the fight against it.

The story revolves around the life of a man, starting from his school years, to how he falls into the trap of drug addiction and finally his fight against it. The film tries to serve the audience with different flavors of a love story, friendship bond, some political drama, and action wrapped in a shell of a social message.

Dakuaan Da Munda 2’s actually is a simple and straightforward storyline which is abruptly disturbed by the addition of political drama in it. To us, it seemed forceful and not so required. In fact, if the makers were so keen to add it to the film, they should have worked finer on its execution.

The film follows three subplots; the present life of Dev Kharoud’s character, the flashback to his early years, and a political drama running parallel to the story.

And while we are penning the Dakuaan Da Munda 2 movie review for you, we must tell you that this story could have been made a lot better if it had more focused execution.

Dev Kharoud plays the lead role of Manga Singh Antal in the film, while Japji Khaira plays his girlfriend turned wife. Balwinder Bullet and Lucky Dhaliwal play the two friends of Manga who are also equally intoxicated. Actors like Karanvir Khullar and Raj Singh Jhinjer are seen playing negative roles in the film.

And if we rate the performances, Dev Kharoud and Raj Singh Jhinjer are two actors who have topped the exam. Nishawn Bhullar and Balwinder Bullet have also passed with pretty good marks.

Talking about Dev Kharoud, his performance is nothing less than to be remarked as ‘speechless’. The way he walks, talks, and even rolls his eyes, everything will convince you to the fullest that he is a drug addict. His dialogue delivery is icing on the cake as it enhances his character. But we were not really happy with the look of Dev Kharoud during his college days. To explain it better; we feel that if a story is portraying a character as a popular and excellent sportsman, he should also look physically fit on screen. But Dev in this film looks the opposite.

And for praising Raj Singh Jhinjer’s performance, excellent is the word. We had loved his acting in Babbar, and now after watching his part in Dakuaan Da Munda 2, we consider ourselves added to his fan list.

Japji Khaira on the other hand was the female lead in the film, and she delivered a good performance in the emotional and strong scenes. But she unfortunately could not maintain the same spark throughout the film. We don’t even understand why she was disappearing from the screen for long gaps.

PS: You’ll also be treated with a glimpse of Kaka Kautki in a simple but beautiful scene.

Sorry, but we did not enjoy the dialogues of the film too much. Some of them were exaggerated and some felt cliché. Better and crisp dialogues could have saved the film by making it more engaging.

But we’d like to appreciate the handful of good dialogues in the film which were limited but decent.

At the beginning of the Dakuaan Da Munda 2 movie review also, we made it clear that this film is based on the real-life story and autobiography of Manga Singh Antal.

So, the story of Dakuaan Da Munda is by Manga Singh Antal, written by Narinder Ambersaria for the film and directed by Mandeep Benipal who had also directed the first film of the franchise.

Starting with the sequence that we liked, it was the emotional climax. In it, the level of Manga’s drug addiction was creatively shown in scene after scene.  How his addictions make him lie to his family, use the name of God for his benefit, fake promises, and at last how he neglects his own friends and family members was a commendable sequence.

But we also felt the film could have been better with better execution, screenplay and editing. The film includes some exaggerated sequences like the wedding one which contributes nothing to the story but only helps to stretch it.

Talking about the editing, the film was long enough that it forces you to lose your grip on the story. At points, it feels boring and turns really predictable.

The music of the film has been divided into two parts in Kiddaan’s Dakuaan Da Munda 2 movie review; the background score, and the playlist. And both of them can be concluded as average.

At some points, the background score was not suiting the scene, but at others, it enhanced some fight sequences for sure. And the same is the case with the film’s playlist. Himmat Sandhu’s song Gundagardi and Shipra-Veet’s song Sang Lagdi Aa were the only saviors from the film’s playlist.

Yes, it was important to bring this in your notice that you can watch the film for Dev Kharoud, but don’t let the title fool you. Though this film is the second film of Dakuaan Da Munda 2 franchise, it has no connection with its title. And in fact, it is also not connected to Dakuaan Da Munda released in 2018, so you can enjoy a fresh story in this one.

Concluding the Dakuaan Da Munda 2 movie review by agreeing with the fact that this surely is a must-watch for all Dev Kharoud fans. His acting and performance in the film are phenomenal and worth an applause. And yes, of course, the social message. It makes the film special and people should watch it. We have added a half star in the film’s overall rating that is only dedicated to the film’s message. We appreciate the film’s vision and concept, but are only disappointed with how it was made.

So, if you are a big and die-hard fan of Dev Kharoud, Dakuaan Da Munda 2 is waiting for you in the theaters near you. But all we suggest you are not to enter the theater with many expectations from the film’s screenplay.

You can watch the trailer of Dakuaan Da Munda 2 here, 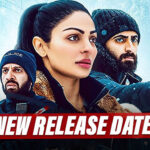