Suraj Prakash Singh, or popularly known as Deep Matharu in the social media world, is a Punjabi Instagram Influencer who generally uploads funny videos with his family and friends. Recently, the popular influencer attempted to commit suicide by consuming a poisonous tablet, Celphos (Sulphas).

Deep Matharu was in a relationship with an American girl and he discovered that his girlfriend was cheating on him with some other man in the US. The victim’s father, Surinder Singh, said that he didn’t know anything about Deep’s love life, he used to talk about everything to his mother. On Friday, all of a sudden he consumed poison and we immediately took him to the Civil Hospital, Batala. The doctors at the Civil Hospital referred Deep to Amritsar.

Deep’s father also added that the girl in the US took advantage of his son’s fame on social media. “She’s betrayed my son”, said the father. As of now, there is no update if the social media star has been treated at Amritsar. The Civil Hospital Batala had referred Deep to Amritsar and his family immediately rushed him to Amritsar.

22-year old Suraj’s success story has been very inspirational. He belonged to a very poor family and started uploading Instagram videos with his family. When one of his videos went viral, Suraj did not look back. He kept on uploading content on his account and as of now, has a strong family of more than 209k followers!

Deep Matharu is currently in a critical situation. Further updates are speculated to be provided by his parents, family or friends really soon! 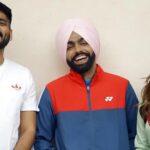