The video has been shot at the capital city of Hungary, Budapest. Few days ago Diljit Dosanjh had updated his fans through Instagram that he was in Budapest and and the singer-actor shot the video of Void at Vienna meanwhile. He is currently working on an upcoming Bollywood movie with Diana Penty and Banita Sandhu in Budapest itself.

Void will soon be the third video to be released from Diljit’s latest album. Lover, the opening track of the album was dropped with its official video and it was soon followed by Black & White’s video. The biggest and the most awaited video, Void, has been finally shot and it is expected that Diljit will announce the release date very soon. 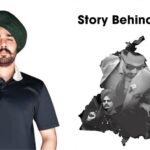