Our favorite and forever charming Diljit Dosanjh keeps on entertaining us either by his projects or on social media. Even amid this lockdown, he is making us all drool over his Instagram account, where he is regularly posting. Recently also, he shared an old video, where he is being asked that he is quite active on the internet. And in response to this, his answers are making the internet go crazy now!

He said he hardly knows anything about the internet. He added that ‘I don’t know how to pay tax online, I don’t know why we pay GST, and I don’t know many such things which are now the routine of other people’. Also, he very sweetly said, he is not against any of these, it’s just that he doesn’t know how to use them.

In the caption of the post he wrote that everything in the video is true as he really doesn’t know how to book a ticket online, and neither he knows how to book a cab. He also mentioned that if he were alone, he wouldn’t have survived these changes in the updated network.

Are you a Pollywood Genius? Prove it! Take this Quiz

He dropped a hint for the media organizations not to make any story or controversies out of this, as in the video and the caption as well, he conveyed a message that he is a regular taxpayer, who pays his taxes in advance and pays GST as well.  It’s just that he doesn’t understand the online system and ways of getting these things done!

Time to prove your love for LAYS! Do you know every Lays flavor?

No doubt this video and his life story entertained us and made us laugh. But we really believe technology is for humans, and not humans are for it. So, it is absolutely fine whatever way one feels comfortable to get things done because, in the end, it’s all about being a good citizen of the nation only, which Diljit truly is. 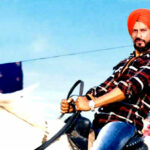