From today onwards that is 7th October the pious month of Hindus that is Navaratre has started. Navratri has been widely celebrated all over the country but for Bengal and Bengali, it holds special significance. Every year the pandals are decorated and people celebrate with full fanfare. But this year it’s something unique and extraordinary as pandals in West Bengal displayed political themes as they welcomed the idols of Maa Durga.

The new kind of pandal picture is flooding all over the internet in which depict the agitation over the farm laws in the country, besides the recent Lakhimpur Kheri incident in Uttar Pradesh. There is a giant model of a tractor being used by farmers till the land is placed at the entrance of the Dumdum Park Bharat Chakra Pandal in the northern borders of the city, illustrating their struggle.

The sidewalls are decorated by the sketch of a car and a farmer lying on its path, supported by a line in Bengali which means “the car leaves behind a swirl of dust while farmers fall under its wheels”.

Not only this, hundreds of sandals and footwears lie on the ground of the pandal, symbolising the scenes after a protest, during which many lose their shoes amid police action. The main pandal is decorated with representations of paddy, hanging from the roof.

Also, Anirban Das, who conceptualized the theme of this Durga Puja says, “Farmers are vital for our survival. They nurture the seed like their parents. The process involves emotions. They have so little which is now getting snatched away by the powers. The situation today is just as it has been during every farmers’ movement down the ages. If they move away from farming what will we eat? Plastic?”

Meanwhile, farmers in the country have been protesting for nearly a year against three laws. And recently they have gone through a brutal incident at Lakhimpur Kheri District, Uttar Pradesh. 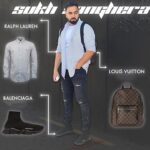 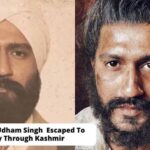