Gurnam Bhullar and Neeru Bajwa starrer ‘Kokka’ is all set to hit the floors on 20 May, 2022. The film boasts off a strong starcast. Neeru Bajwa is undoubtedly one of the greatest actresses of cinema history while Gurnam Bhullar is the new big thing.

Whenever a movie is announced, the audience decides whether to take out some time from their busy schedule and watch it or is it not worth it. So, here are 5 reasons that will make your decision easier in case of Kokka.

5 Reasons Why Kokka Is A Must Watch

Gurnam Bhullar is without a doubt one of the finest actors of the modern Punjabi cinema. His roles in Main Viyah Ni Karona Tere Naal, Lekh, Surkhi Bindi, Guddiyan Patole and many more have made him a fan favourite. There is hardly any actress who has come close to the stardom of Neeru Bajwa in the Punjabi film industry. She has been a part of movies that brought revolution in the Punjabi Cinema. The two absolute brilliant actors coming together is a big enough reason to watch Kokka at the theatres.

Kokka is not a casual Punjabi comedy. Neither is it a film about issues of a family in a village. It is about a 40-year woman, falling in love with a much younger guy and the aftermath of that. There are some movies that try to jump out of the room filled with the crowd, and Kokka is surely one of those.

A follow-up of the second point, the unique storyline of Kokka also means that the team has gone out of the way to break some stereotypes. An older woman marrying a younger man might have become common these days, but there’s still some stigma in people regarding this, especially Punjab. Kokka is an effort to break those stereotypes.

When artists like Gurnam Bhullar, Raj Ranjodh, The Landers are working on a project, how come it is not going to be a blast. The songs Tu Te Mai, Darling, Sohna Koi Nahi are all amazing and the audience has already fallen in love with them.

A storyline is incomplete without twists. Nobody can sit for 2-3 hours with their eyes stuck to a screen if they are not going to see unpredictable plot twists and the trailer of Kokka has shown us that the movie has huge twists in its plot. Gurnam and Neeru initially fall in love with each other and then suddenly, when everything seems to go well, everything’s spoiled! Wouldn’t you like to know what happened?

Kokka is all set to hit the cinemas on 20 May, 2022. Above are 5 reasons why we recommend you to watch the movie at your nearest theatres. We hope Gurnam and Neeru bring out a film to remember. 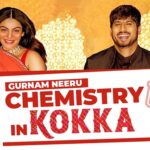