The much anticipated film Fuffad Ji was taking rounds all over the internet since its announcement and finally it is today when the trailer of the film has been released officially. The movie features Gurnam Bhullar, Jasmin Bajwa and Binnu Dhillon in the lead roles making the film’s base very stronger by their acts, as expected.

The trailer looks quite promising and transparently depicts the world famous accurate talks about a ‘Fuffad’ (uncle) and his deeds in weddings or family gatherings at his in-laws. A Fuffad is generally considered as the main man among the family members of the girl’s side and it is believed to feel disrespectful if the family does not obey to what he says/wants. Arjun Singh receives all the respect and gets cherished. And this is what we have got to see in the trailer.

Binnu Dhillon who will be seen playing the role of Arjun Singh (Fuffad) in the film, is one of the main reasons for the viewers to stick on the screens and watch out for his stupendous acting. Whereas, Gurnam Bhullar will be seen playing the son-in-law’s role. Talking about the story, Binnu Dhillon aka Arjun Singh is seemed to be the most pampered one in his in-laws and decides to arrange the marriage relationship of Jasmin Bajwa.

While, Gurnam Bhullar forms a love angle with Jasmin in the film and Binnu Dhillon, who already had some grudges with Bhullar, does not agree with the relationship which results into a fun dispute between the Jija and the Fuffad. Other than the main leads, all the supporting characters have done a great job in providing the viewers the best of the entertainment. Jassie Gill will also be seen featuring in the film as a cameo character whose little glimpse can be seen in the end of the trailer.

Binnu Dhillon And Jaswinder Bhalla Speaks Against Zee Punjabi, Says ‘They Are Not Our Families

‘Fuffad Ji’ is directed by Pankaj Batra and produced by K Kumar & Zee Studios. And it is written by Raju Verma. Overall, we have received what we expected from the film’s trailer and it will be exciting to see the movie in the theaters on 11th of November, 2021. 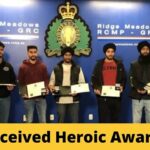