Punjabi singer and actor Gippy Grewal is usually in limelight for his upcoming acting or singing projects. And he also enjoys a crazy fan following too, which is currently focused on Gippy Grewal’s upcoming music album.

If you are one of the admirers of Gippy Grewal, then you must know that he too has joined the ongoing album party in the Industry. He had recently announced his upcoming album. And fans are excited for it.

While fans were busy guessing the name and other details of the upcoming album of their forever favourite singer Gippy Grewal, the artist has revealed the name himself. But not in a very usual and easy way.

Gippy Grewal Is The Big Bull! This Daaka X Scam 1992 Edit Will Make You Believe It

Gippy Grewal took it to his Instagram account and shared a picture of him posing backwards. And in the caption he wrote,

And it is enough of a hint to make the smartest fans get the name of the upcoming album right. If you look at Gippy’s picture closely, you’ll realise that his black jacket reveals it all. It has ‘Limited Edition’ written on it boldly with fifteen subtitles.

And this simply means Grewal’s upcoming album will be named ‘Limited Edition’ and will include a total of 15 songs. Though the names of the songs and their details aren’t clear in the picture, we are sure he is going to unveil the surprise very soon.

Recently also, Grewal has shared posts to announce his album on Instagram. And one of the cutest was when Gurbaaz was listening to a song from his father’s upcoming project.

The release date of the album is not announced yet, but the details will be spilled soon. 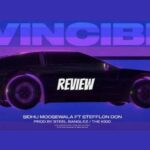