Punjabi Film Industry has entertained the fans with various super hit movies and loved the on-screen pairing. But it looks like, Pollywood has finally become really open to fresh pairings. There are various actors who are set to pair opposite each other for the first time in some upcoming movies, and Tania & Gippy Grewal are two new names added to the list.

Yes, a new Punjabi movie has been announced starring Tania and the superstar Gippy Grewal in the leading roles. Though the project is still untitled, its announcement was huge enough to make the fans super excited.

On one hand there is Tania who has been featured in highly acclaimed movies like Sufna. And on the other, there is Gippy Grewal whose skills and talent require no introduction.

Both Grewal and Tania shared the pictures on their Instagram handle where they were seen posing with writer Rakesh Dhawan and director Pankaj Batra.

The film’s team had not revealed any details regarding the project. So, when team Kiddaan reached out to Tania, the actress spilled some beans. She revealed that her character in the film will be equally bubbly and serious. Not only this, but she also confirmed Gippy Grewal’s all-new avatar in the film. As seen in the picture, Gippy is seen as having a very different look.

Tania also praised the film’s story as it was the reason that made her accept the film’s offer. Talking about the theme of the film, the actress revealed it will include a good story, screenplay and comedy.
Also Read: Honeymoon: Release Date Of Gippy Grewal & Jasmin Bhasin Starrer Film Announced

The shooting of the film has just begun, and the fans are super curious to know more and more about the film. Also, since the film is still untitled, the fans are guessing the name. Can you? 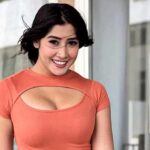