We are finally going to listen to the voice of Gippy Grewal in a song. It’s been so long since we have been waiting for the album Limited Edition. Now, Gippy has announced a bonus track titled ‘2009 Reheated’ to be released from the album on 28th of July.

The lyrics of the song’s been written by Jagdev Maan and the music has been done by Bhinda Aujla. The main man, Gippy Grewal, is making a comeback in the industry with this album.

The hopes from Limited Edition are Unlimited. The album’s been one of the most awaited albums of the year. Gippy Grewal had been giving hints at the potential title of the song ‘Reheated 2009’. He was also seen uploading posts of his old songs, the songs that made Gippy Grewal an all-time hit. This made everyone wonder if the latest album was going to have those songs remade or something like that!

Gippy Grewal had not officially confirmed anything about the album but in one of his posts, he had given some hint about it. After uploading a post with the background music of his superhit track ‘Hathiyar’, Gippy wrote in the caption that Limited Edition also has the same stuff in it.

We cannot wait anymore! The bonus track is finally dropping on 28th of July. Though the date is far enough for the fans to make countless guesses about the album and the song, we at least have a date to wait for! We hope the album release date is also revealed as soon as possible. 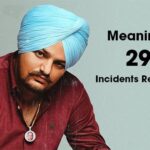