Sardar Udham fame Vicky Kaushal seems to be on a roll for his professional life as the actor recently shared exciting news. Vicky is all set to entertain his fans once again with an upcoming film titled ‘Govinda Naam Mera’. Taking to Instagram, the actor shared the poster and his first look in which it seems that he is portraying the role of dancer. Along with Vicky, the audience will also watch the performance of Bhumi Pandekar and Kiara Advani.

The actor has also shared the first look of Bhumi as well as Kiara. After seeing the poster and caption, it is clear that Bhumi will be Vicky’s wife and Kiara will be his girlfriend in the upcoming movie.

Also, Karan Johar who is producing the film tweeted and promised that ‘Govinda Naam Mera’ will be a laugh riot. He wrote, ‘Presenting Govinda Naam Mera, where there will be unlimited laughter, confusion and chaos! In cinemas on 10th June, 2022.’

Coming to the credits, the film will be written and directed by Shashank khatian. The film is scheduled to release on 10 June 2022. And fans are excited as they will see many twists and turns in this epic film. However, apart from Govinda Naam Mera, Vicky Kaushal has Sam Bahadur and Immortal Ashwattama in his line up. Speaking of Bhumi Pandekar, she has Badhaai Do and Raksha Bandhan, which will also release soon. And Kiara Advani will soon be seen in Bhulaiyaa 2 and Jug Jugg Jeeyo.

Vicky Kaushal To Feature In Bear Grylls Adventure Show ‘Into The Wild’. Premiere Date Inside 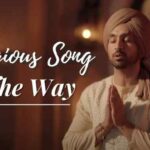