We miss no opportunity to praise the diamond boy Gurnam Bhullar, just like he misses no chance to entertain and impress us. We all are aware about his upcoming project which is punjabi movie ‘Lekh’.

The shooting of Lekh has started already, and the pictures from the sets are also out.

But the most exclusive detail is that Gurnam Bhullar has gained a total of 30 kgs of weight for his character. This transformation can be easily seen in Gurnam’s Instagram posts which he is updating lately.

His gaining weight was becoming a concern for his fans and everybody was wondering about his health. But now it’s clear that Gurnam Bhullar underwent transformation for this upcoming movie.

The transformation and Gurnam’s achievement are equally huge, because it’s not as easy as it seems to gain 30 kgs.

The fan pages of Gurnam Bhullar are also appreciating his transformation.

We must say, Gurnam has already put massive efforts and hard work into the pre-production stage of ‘Lekh’. And now, this is making us more excited about the upcoming Punjabi Movie. Gurnam Bhullar will be seen opposite Tania in the upcoming movie and we really hope the movie does wonders on screen and does justice to Gurnam’s hard work as well. 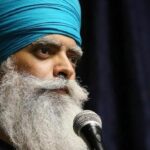