It’s time for high hopes and expectations for all the Himanshi Khurana fans, because possibly she will be seen in an upcoming Punjabi feature film soon.

Punjabi actress and model Himanshi Khurana is now ready for something new. As per reports, she might feature opposite superstar Gippy Grewal in an upcoming Punjabi movie.

It’s buzzing that Miss Khurana is in talks with the production house and going through scripts. The movie is untitled yet and no more details about it are revealed yet.

But if everything settles on the right space, the shooting of this project will commence from the First week of April.

Himanshi Khurana and Gippy Grewal both are two renowned, talented and popular faces of the Punjabi Industry. While they both enjoy a massive fan following, it will be their first feature film together.

And on the other hand, Himanshi Khurana recently released her track ‘Surma Bole’ and achieved the new milestone after getting featured on the New York Times Square Billboard.

We believe if these two superstars will come together and share the screen space it will create a great entertainer for their fans and the audience.

For now, nothing is confirmed, but let’s cross our fingers and wish for the best. 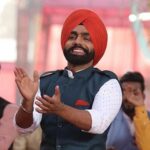