The Punjabi megastar Karan Aujla has earned an irreplaceable position in the Punjabi Music Industry. His super hit Punjabi songs, albums and Eps have helped him earn massive love and recognition worldwide. And now, the singer is all set to enter the Hindi Music Industry as well.

Yes, you read that right! The fan favorite Aujla is ready to make his debut in Hindi Industry with a Hindi song. Titled Laut Aana, Karan Aujla’s first Hindi song is going to be a sad romantic track.

Also Read: Do You Know The Story Behind Karan Aujla’s Wolves Tattoo?

The song will also feature Tanu Grewal opposite Aujla in the music video. Drj Records has shared the poster of the song on its Instagram account where Karan Aujla is seen captured with Tanu.

Earlier, Tanu Grewal had already shared a picture with Karan Aujla, asking the fans to guess who she was.

Also Read: Mirzapur 3: Amazon Prime’s Much Awaited Crime-Thriller Finally Goes On Floor! Details Inside
Though the confirmed release date of the song is not officially announced yet, it is expected to hit the music charts next month. The fans are super excited for this one because Karan Aujla has already proved his talent in Punjabi Industry, and with Laut Aana, he is going to make it big in Hindi Music Industry as well. 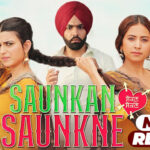