When one of the biggest stars of an industry drops his first-ever music album, worldwide charts are bound to show disturbances. But the shocks would come so soon, nobody had expected it! It’s been just a day since Karan Aujla dropped the most awaited album of the year, BacThafu*UP, and it is already trending worldwide.

It has been officially released on Apple Music and Spotify streaming platforms. The love and the response that the album is getting from all over the world is commendable. It has already grabbed the #1 position on the Indian Apple Music Top Album Charts, overlapping Shershaah movie album and Drake’s latest album, Certified Lover Boy. It also sits comfortably on the top spot on Indian Itunes Album Charts.

The album is also trending #2 on the UK Itunes Top Album Charts and #3 on the Australian Apple Music and Itunes Charts. The performance in New Zealand has also been mind-blowing, it is trending #2 Apple Music and #3 on Itunes Album Charts. Norway, Philippines, Qatar, United Arab Emirates, Spain, Italy, Portugal, Malaysia, Singapore, Hong Kong, Latvia and where not! The album is trending everywhere.

BTFU Review: Karan Aujla And Tru Skool Takes Us To The Good Old Days Of The Punjabi Folk

It is a moment of pride for the Punjabi community that a Punjabi album is reigning worldwide. Topping charts all over the world, even in the countries where the Punjabi language is merely understood and spoken. The response to BTFU has shown that music truly has no boundaries and when it comes to Punjabi Music, the world loves it! Karan Aujla is representing Punjabi Music on a global stage with his latest album and it is a big boost for our music industry. 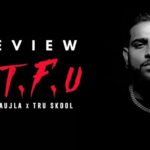