The ongoing tussle between Delhi CM Arvind Kejriwal and the LG has now taken a new turn. On Thursday, a request was made to the Ministry of External Affairs via its website asking for approval for Delhi Chief Minister Arvind Kejriwal’s intended trip to Singapore to attend the World Cities Summit.

Arindam Bagchi, the Ministry of External Affairs’ spokesperson, stated that the ministry has not yet received any requests for political clearance about the intended trip to Singapore by Delhi chief minister Arvind Kejriwal. Though, he added that the ministry would shortly make a decision after receiving an entry on the MEA’s official web portal for requesting political clearance for foreign visits on Thursday.

Earlier, the Lieutenant governor V.K. Saxena advised the AAP convenor and Delhi CM Arvind Kejriwal to not to attend the World Cities Summit in Singapore. As per the tweet by PTI:

However, CM Kejriwal challenged the LG’s decision and even questioned the foreign visits of prime minister Narendra Modi. As per a tweet from the Aam Aadmi Party’s official Twitter handle, quoting deputy CM Manish Sisodia’s statement:

This entire tussle has turned into a political battle between the Aam Aadmi Party and the Bharatiya Janata Party, resulting in a series of Tweets and statements from the leaders of both the parties. Delhi CM Arvind Kejriwal has even critized the BJP-led Central government for not allowing him, the chief minister of the national capital, to visit Singapore to attend an event. 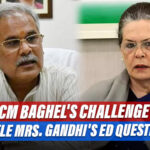