The Farmers’ Protest is still continuing in India, in which Indian farmers are protesting against the government’s latest ordinances in the farm bills. And to support the farmers in this protest, Punjabi Industry came forward and released a track, titled “Kisaan Anthem”. The song reached masses and collected immense love from across the world. And now, the much awaited track ‘Kisaan Anthem 2’ has finally released on YouTube on March 8th.

And within 24 hours of its release, the song has gained more than 800k views, which also made the song go trending at number 2 position on YouTube’s trending list. But soon the song was dropped from the trending list.

We noticed by 11:28, the song was trending at number 2nd on YouTube, but when we noticed the same at around 12:30, it was no longer listed in the trending list.

You can check out the screenshots here,

The lyricist Shree Brar also commented on this in his recent snap story. You can check it out here,

You can check out the song by this link,

Also Read: Paani Ch Madhaani Movie To Hit The Theatres On 21st May 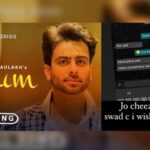