The movie is special in all possible senses. Gurnam Bhullar, the lead actor, had to put on 30 kgs of weight for a sequence of the movie and later had to shed it off. Similarly, Tania too went through drastic physical transformations for the movie. Photos of both the artists going through transformations have been circulating around the internet for a long time and we will finally get to see the result of all that hard work on 1 April, 2022.

ALSO READ | From Gaining 30Kg To Losing All The Extra Kilos, Gurnam Bhullar’s Transformation For LEKH Is Jaw Dropping

What makes the movie more special is that it is a tribute to probably one of the greatest Punjabi movies ever made, Mel Karade Rabba. It won’t be an exaggeration to call the Jimmy Shergil and Neeru Bajwa starrer, a movie that represents Punjabi cinema worldwide. The interesting thing is that even the poster of the movie ‘Lekh’ has been created by putting on Tania and Gurnam’s faces in place of Neeru and Jimmy’s in Mel Karade Rabba’s poster.

The movie is directed by Manvir Brar while the hugely popular and talented Jagdeep Sidhu has written the screenplay and dialogues of the movie. The superhit duo Jaani and B Praak have handled the music department of the film and it is presented under the banner of White Hill Studios. The announcement of the movie has been made by sharing the official poster on social media by the team. So! Book the dates already, 1 April 2022 and we are sure this is not an April Fool? It’s really releasing on the date, isn’t it? 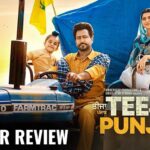