Anjali Arora, who rose to fame with her Instagram reels seems to have landed in trouble. An MMS video is spreading on the internet like wildfire which allegedly features Anjali Arora.

Anjali is known to make reels on Instagram which usually go viral. She also enjoys a massive fan following which got her an entry in Kangana Ranaut’s reality show Lock Upp. It added to her popularity and fame.

Now, it is being said that her MMS video has leaked on the internet in which Anjali is allegedly seen physically involved with a man. Though there is no confirmation on the fact that the girl in the video is Anjali only, netizens have started trolling her for the same.

The viral video has actually created a buzz and various users on the internet are participating in the hot discussion.

Anjali has not released any clarification or statement regarding the viral MMS yet. But after the video went viral, the internet was left divided. While Anjali’s fans are busy defending her by stating the girl in the viral video is not Anjali but someone else. On the other hand, others are criticizing and trolling Anjali for the same.

Sometime after the video went viral, a picture shared by Anjali Arora on her Instagram story also went viral. In the picture, Anjali is seen posing with two men, and one of them seems to be the one in the viral video.

No official confirmation or statement on his case has been made public yet by the authorities or Anjali. 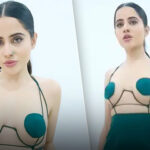