There’s no more positive feeling than to complete the work that we have started with full motivation, no matter what it is. And this time the whole team of the upcoming film ‘Kali Jotta’, is having the same feeling. As the film has wrapped up their shoot, shared by actress Neeru Bajwa.

Neeru took to her Instagram story and shared the news. Along with ‘Kali Jotta’ customized cake Neeru tagged the cast and crew members of the film.

Moreover, Neeru Bajwa has recently completed her shooting for her upcoming Hollywood debut film. We must say that Neeru’s basket is filled with some of the greatest projects for now.

The first schedule of Kali Jotta was wrapped up in March 2021 which created a lot of stir among fans.

Coming to the credits, the film will be presented by Neeru Bajwa Entertainment, U&I Films & VH Entertainment, while Vijay Kumar Arora will be directing it. The story and screenplay is written by Harinder Kour.

Alongside Neeru Bajwa and Satinder Sartaaj, ‘Kali Jotta’ also stars Wamiqa Gabbi in the lead. Also, the release date of the movie was recently announced. It will make a theatrical release on 25 March, 2022. This is the first time these three will be seen sharing the screen space, and the audience is eagerly waiting for this trio. 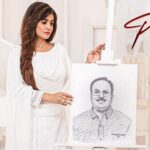