Kangana Ranaut is into a new controversy again, not something unfamiliar to hear. The actress has been a controversial point for the nation for a long time now. Every now and then she manages to do something that pulls up the public’s attention and creates controversy. This time, it’s not her acting, not her tweets about the farmer’s protest or anything but her cooking. The actress claimed to have prepared a delicious-looking dessert and took it to social media to share her artistry. Kangana shared the picture of her food on social media and called the food “Selfmade”. But the public is not so easy to befool. People soon realized that the pictures had been stolen from the web and posted on Twitter by the actress.

She initially shared a dessert’s photo saying that there’s nothing she appreciates more than self-made food. Another tweet by her featured a “Without Honey Option” of her dessert. In another tweet, the actress expressed her joy because she claimed the public to have mistaken her cooking for “Some International Chef’s Famous Blog”.

What followed after, was floods of trolls. The actress had to go through excessive trolling for claiming someone else’s work to be of her own.

See some memes on Kangana, tweeted by random people.

Kangana, after going through excessive criticism, took it to Twitter to clear the air. No statements or apologies were made regarding the stolen picture rather the actress claimed that all the influencer’s accounts automatically get memes to post mocking and making fun of everything she does. She claimed all the edits to be fake and considered all the trolling an attack on her credibility and dignity.

This article is in collaboration with Gautam 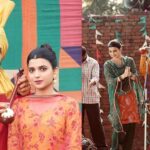