Punjabi Singer Nimrat Khaira who is loved for her melodious vocals and heart-winning looks has recently rejected an offer from Bollywood Industry. As per confirmed sources, Nimrat Khaira has been rejected to be a part of the upcoming Bollywood movie Gadar 2 which is the official sequel of the superhit and blockbuster movie ‘Gadar: Ek Prem Katha’ starring Sunny Deol and Ameesha Patel as the leads.

As per Kiddaan’s sources, Nimrat and her team have rejected the offer because the movie is being produced by Zee Studios and will star Sunny Deol. The Bollywood movie’s team approached Nimrat Khaira for playing the lead role in the movie and are still trying their best to get Nimrat on board.

But the team says they are in support of Farmers and Punjab, hence they cannot sign a project with Zee Studios.

Noticable is the fact that, Zee News had compared the protesting farmers with terrorists, hence the organisation is facing a huge outrage from both the Punjabi Industry and audience. Gadar 2 is surely a big project and rejecting such an awaited and hyped movie is a bold step by Nimrat Khaira.

Talking about Nimrat Khaira, she has played roles in few movies but her first movie as the lead ‘Jodi’ is queued for release which stars Diljit Dosanjh opposite her. 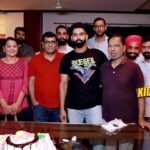