Amidst the frequent and for the first time, three meetings with Congress president Sonia Gandhi, now as per the internal sources of Congress, Prashant Kishor will be again having a meeting with the Congress high command tomorrow.

As per the sources, he has given a presentation or 600 slides, on how to revive the grand old party at state as well as national level. In his third meeting at 10 Janpath, Prashant Kishor has met two former CMs of Madhya Pradesh – Digvijaya Singh and Kamal Nath, discussing on various strategies for the comeback of the Congress party at the state level in MP. Now is next meeting may include Rajasthan CM Ashok Gehlot and Chattisgarh CM Bhupesh Baghel.

According to the sources, the cover page of PK’s presentation has a picture of Mahatma Gandhi with his quote: “The Indian National Congress cannot be allowed to die. It can only die with the nation.” The words of Mahatma Gandhi reflected the dire position of the grand old party.

In his presentation, PK laid out the current position of the Congress party in the country’s political scene with special focus on its statistical strengths and weaknesses. The plan, a blueprint for the preparation of the 2024 Lok Sabha election, highlighted India’s population, the number of Congress MPs and MLAs, the party’s outlook towards women, youth, small businessmen, and farmers, with a special focus on the importance of the 13 crore first-time voters in 2024.

As per the sources, he gave a lot of advices to the party leadership, including:

1. The Congress needs to resolve its leadership crisis

2. Alliance issues need to be resolved.

3. The party must return to its previous ideals.

4. The Congress will have to mobilise its workers and leaders at the grassroots level.

5. The party needs to overhaul its communication system.

Apart from this, PK has also highlighted how the grand old party has been losing ground since 1984.

Earlier in April, there was a strong buzz that PK will be joining the Congress party as a general secretary. The announcement was about to be made but was cancelled at the last moment.

“Yes I had talks with the Congress high command and we agreed on almost 95% issues, but due to the remaining 5%, things didn’t move ahead”, said PK in an interview on India Today during the results of 5 states assembly elections recently.

PK may still be made general secretary, but it is important to note that Kishor hasn’t demanded any specific post in the party. However, he has asked for the freedom to implement his plan for 2024.

If he is indeed given this authority, then it would make him the most powerful leader in the party after the family, irrespective of the post he gets, maybe the “next Ahmed Patel” for the grand old party or say, the Gandhis. 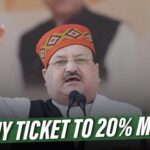 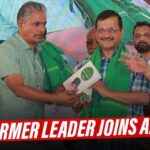