Opi Music, one of the leading newcomer music producers of the Punjabi music industry has been working with Prem Dhillon for a long time. The duo has made songs together like Just a Dream and Behind Barz, both of which have been pure superhits. While Behind Barz was a great hit, it was Just a Dream that proved to be a standout song in Prem’s career.

Just a Dream was the first time Prem Dhillon came up with a romantic and soulful song. The ‘vailley’ jatt turned soft in that song and let everything out. Everything about the song, Prem’s vocals, Opi’s music and Jagjit’s lyrics blended so well together that it sounded the most perfect of songs. Opi Music recently revealed how the song actually became a reality.

Opi Music initially created some music, and it was just a matter of time that the music hit Prem and he said, “I got a vibe”. Prem immediately started making a beautiful composition on the music, which would later become the composition of Just a Dream. Along with the music and the composition, Prem Dhillon also took out Jagjit’s lyrics, which the singer was carrying around in his pocket for the last 2 years.

When all the things were put together, Just a Dream was created and Prem and Opi both felt like it was a big vibe! They went on to release the song which became one of the biggest hits of the artists’ careers. Opi Music also shared a small snippet from the studio when Just a Dream was in its infant stage:

Opi Music and Prem Dhillon’s duo was so loved by the audience that they decided to make another song ‘Behind Barz’ together and released it only after 3 months of releasing Just a Dream. Behind Barz also went on to become a hit and the duo again ruled the hearts of the audience.

Opi Music went on to reveal about his upcoming songs with Prem. He said that the songs to come are so huge and great that everyone would love them. Prem and him are working really hard for their audience and they cannot wait for the songs to officially release. Sharing a small part of the song on Instagram reels, he revealed that ‘That’s Not Love’ is one of those songs. 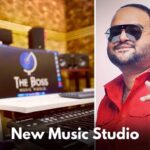