Neha Malik is one of the A-listed actresses of the Pollywood industry. She also entertains her fans with her glamorous photoshoots. Recently the actress shared the first poster of her upcoming sequel film Pinky Moge Wali 2.

The actress is super excited for this project, as cameras will start rolling from 20th February 2021. In film, the actress will be seen playing the lead role of Pinky moge wali, along with actor Jimmy Sharma as Rogger, and Gurneet Dosanjh as Fateh. Pinky Moge Wali 2 is the upcoming complicated love story drama which is written and directed by Kapil Batra:

Talking about the other credits, the film is bankrolled by Deepak Goel & Kavita Goel and presented from the banner Kapil Batra production & Deepak Goel productions. The film is the official sequel of the 2012 released film Pinky Moge Wali starring Neeru Bajwa, Gavie Chahal, Geeta Zaildar, and KS Makhan.

Also Read: Diljit Dosanjh Shuts The Rumors About His Fight With Gippy Grewal 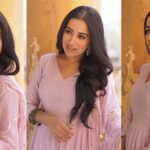