Sidhu Moosewala and Karan Aujla are two of the biggest names in the Punjabi Music Industry at present. We all know the two spent some time together at the beginning of their careers but nobody knows what went wrong and the two were indulged in one of the biggest beefs of Punjabi Music history.

But a true music lover wants just one thing, to see the two greats in together. It is a pity how Punjabi Music fans enjoy two of the biggest music superstars in their industry but never get to see them together. But, we are sure this old video will put a smile on your face.

Sidhu Moosewala and Karan Aujla have openly talked about knowing each other and spending some time together during their times in Canada and a video has surfaced on the internet, probably, back from those times. It is a Snapchat story of Punjabi singer Elly Mangat.

Karan Aujla can be seen sitting in a ‘picka’. Elly Mangat initially pans his phone’s camera on Karan Aujla. He later switches the camera from rear to front and the audience sees Sidhu Moosewala sitting in the backseat of Elly Mangat’s car.

Both Karan and Sidhu are very young in the video. This is probably a once in a lifetime video because the kind of equation that exists between both the artists today, might never let them recreate this. Recently too, the two got indulged in an online spat when Karan Aujla announced his collaboration with American Rapper YG in his upcoming EP Way Ahead.

Nevertheless, the two are simply the best we have ever seen. If it wouldn’t have been for the contribution of both of them, Punjabi Music Industry wouldn’t have been where it is today. Today, it is no more a regional industry, rather a global one. It blows our mind away thinking how limited Punjabi speakers are there in the world yet Punjabi Music Industry has reached all parts of the world. At the end, all we want is solidarity and togetherness existing among the artists and we would love to see Karan and Sidhu together, one day. 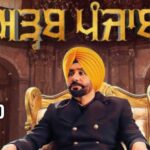