After producing various comedies, romantic-comedy and crime thriller movies, the Punjabi Film Industry is now once again coming up with an action movie. Yes, an upcoming Punjabi movie has been announced and is teasing the fans for its promising action. The project will be called ‘Junior’ and the makers have also reserved a date in 2023 for its release.

Coming to the film’s official poster, it features a chopper and various police cars, and this scene is giving us major hints that this film is going to have crazy chasing sequences with action.

Also, the tagline of the film describes Junior as, ‘The Biggest Manhunt Of A Man On A Hunt’. This is another big hint that’s preparing the fans for this amazing and action-packed movie. With the poster and announcement, the makers of Junior have also announced its release date. This upcoming Punjabi movie will be hitting the theaters on 26 May 2023.

Now coming to more credits of the film’s team, Junior is produced by Fateh films and Irakli Qiria 100 filmss. Yannick Ben and Amritpal Singh will be handling the stunts in this action-packed Punjabi movie.

More details about the film including its plotline and characters are still under wraps. As the film is ready to hit the silver screens on 26 May 2023, the fans are already eager for this one. 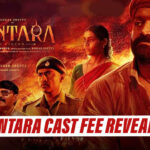