Canadian singer Robyn Sandhu is one of the most talented rising stars in the Punjabi Music Industry. The artist is all ready to drop his next track. The song titled ‘One Sided’ has been announced by Robyn by revealing the first look through social media.

The song features Intense as the music producer and the video of the song has been done by Harman Sekhon, who is Robyn Sandhu’s first choice when it comes to directing videos for him.

Robyn Sandhu is a Sri Ganganagar based Canadian-Punjabi artist and his rise in the industry has been exceptional. He is often described by his fans as one of the most talented writers in the Industry. He mainly started his career by posting second-clips on short-video platforms like Tiktok.

His poetry attracted him an honest Punjabi audience and he was soon a known name among the public. Then he finally started dropping Punjabi songs, and went on to add tracks like Fake Idols, Inception, Kyon, 13 (Thirteen) to his career. His songs are known for their deep lyrics often inspired by his feelings and  events that took place in the artists’ life.

As of now, he is one artist everyone has their eyes on. It won’t be an overstatement to say he might be the next big-thing in Punjabi Music. ‘One-Sided’, the upcoming song, has been described by Robyn as a ‘Story Never Told’. The poster and the caption of the announcement post hints that the artist is probably going to talk about a One-sided relationship, an untold story. The song with its official video will soon be dropping on Robyn Sandhu’s official Youtube channel. 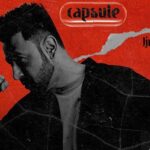