Coming to his social media, he shared a poster of his new song ‘Roka’. The poster doesn’t feature any female artist, as it’s a still from his music video. This is the official track under ‘Diamond Star Worldwide’. From the first look of the poster, the song seems to be a peppy number. However, Something adhesive can only be explained when the teaser has come out. He further captioned the post,

Talking about the credits, the song is composed and penned by Gurnam Bhullar, music is given by Sharry Nexus, and the video is directed by Vikram.

Meanwhile, on the professional front, Gurnam Bhullar has a lot of projects lined up for the year 2021, he will soon be seen in the film ‘Lekh’, ‘Sohreyan De Pind Aagya’, ‘Kokka’ and’ Ni main vyah ni krona tere nal’. 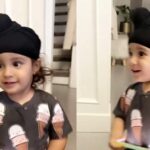