The sudden demise of Sidhu Moosewala has not only affected his fans and family, but brought the film and music industry to a complete standstill. Now, team Sher Bagga has announced that the Ammy Virk and Sonam Bajwa starrer has been postponed.

Sher Bagga was set to be released in theatres on 10 June, 2022. However, in light of Sidhu Moosewala’s brutal murder on 29 May, the team has decided to postpone the film. The new release date has not yet been announced.

Sidhu Moosewala’s murder has come off as a shock to everyone. All the movies and songs that were set to be released in the first week of June have been postponed due to the tragic event. The industry has lost its brightest star and they are paying their respects to him in their own ways.

Ammy Virk and Sonam Bajwa starrer Sher Bagga narrates the story of a pregnant woman (Sonam Bajwa) and the child’s father (Ammy Virk). Who decides to keep the baby, how things unfold to others and many such questions are answered with a layer of comedy.

The audience as well as the artists are not yet in the mind frame to enjoy a film. The social media is flooded with pictures and videos of tribute to the late singer that are enough to melt the hardest rock.

We hope the industry as well as the audience recovers from this trauma soon. Sidhu Moosewala’s legacy will always remain alive with us in the form of his films and songs. 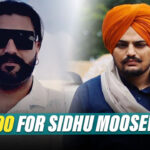