There were rumors and buzz all around which said Sidhu Moose Wala will be soon collaborating with music producer Wazir Patar. And we must say that not everything you read on the internet is false.

The rumor has proved to be true as Wazir Patar has recently shared a picture with Sidhu Moosewala on his Instagram Account. The captain to the post says, “ਕਦੇ ਨਾਮ ਥਾਣੇ ਹੁੰਦਾ ਕਦੇ ਬਿੱਲਬੋਰਡ ਤੇ ..”

Which means, sometimes the name is in Police Station, and sometimes on Billboard”

He also shared the picture with Moosewala on his Instagram story and wrote, “3 days session

Their fans have already started dropping comments which says, ‘Waitingggg’.

This is going to be a great collaboration, and it looks like the title of the upcoming project would be ‘Mass Destruction Weapon’.

What are your views on this collaboration? Do you think Moosewala will again make it to the chartbusters list? 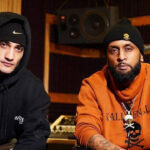