Are you even a real Punjabi Cinema fan if you were not already waiting for Qismat 2 to release immediately after watching the superhit Punjabi movie Qismat? You’re lying if you say so!

Qismat 2 without any doubts is the most awaited upcoming movie of Punjbai Film Industry. Though the movie kept teasing us with its schedules getting postponed due to COVID-19 and other reasons, the release date of the film is finally out now.

Qismat 2 will be hitting the theatres on September 23th, which is after 3 years of Qismat. Qismat released on 21st September 2018, and starred the most loved on-screen couple Ammy Virk and Sargun Mehta opposite each other.

Ammy Virk took it to his Instagram account, where he shared the poster of the movie and announced its release date.

Qismat 2 will star Ammy Virk, Sargun Mehta and Tania in the lead roles, and the superhit musical duo of B Praak and Jaani have worked on the music for it.

No matter how many Punjabi movies are being announced almost everyday now, we are really very excited for this one. Though the release date is a little far, we believe it will be worth the wait. 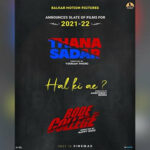