Harrdy Sandhu’s latest release. Bijlee Bijlee got everybody’s eyes upon it but the special thing that has stuck in our minds is the female lead of the song opposite Harrdy. Palak Tiwari is taking the screen on fire with her on-screen debut in the industry and that too in Punjabi music industry.

The youngster, Palak Tiwari is the only daughter of Indian television and movie actress Shweta Tiwari from her first marriage with actor Raja Chaudhary. After the separation from her partner, Shweta got custody of Palak. Palak was born in 2000 and is currently 21 years old. She also has a sibling named Reyansh Kohli from her mother and stepfather, Abhinav Kohli. Palak is very close to her little brother and usually posts about him. However, In 2019 the debutante’s mother filed a complaint against her second partner for domestically abusing her daughter. Later when Palak opened up about it, clarified everything that it was just some disturbing and inappropriate remarks he used to make upon her.

Palak was already ready for her debut on the big-screens before ‘Bijlee Bijlee’ with a bollywood debut. She was roped in as the lead actress opposite Vivek Oberoi in the movie ‘Rosie: The Saffron Chapter’ whose teaser was already out but is pending for its release in theaters. Her debut movie is all about a ghostly love story directed by Vishal Ranjan Mishra.

It was a sudden surprise to see Palak Tiwari debuting in a Punjabi song opposite Harrdy Sandhu and looking Bollywood-ready in her first screen outing. She has opted for an all different avatar in the song, looking elegant in every way possible and taking over the screen space very gracefully. Not only just the presentation but she has proved to be immensely impressive with her smooth dance moves she performed in Bijlee Bijlee.

Looking forward to more such surprises as we are very well impressed by her work and first ever screen appearance. We also wish her all the luck for her debut bollywood movie opposite Vivek Oberoi. 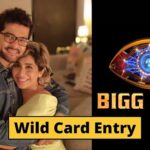