Karan Johar who is currently riding high on the success of his Netflix show The Fame Game starring Madhuri Dixit is all set to bring a certain level of freshness under his banner Dharma Production. The director and producer have always come up with something unique on his table. And once again he is winning everyone’s heart with the new announcement.

Along with their individual posters, KJ also shared a series of posters in which the audience gets to see all of the actors together.

The film is titled Bedhadak and it is written and directed by Shashank Khaitan, who is also producing the film alongside Karan, Hiroo Yash Johar and Apoorva Mehta. The film is said to be presenting a new era of love where passion, intensity and boundaries will be crossed.

Meanwhile, a day earlier to this announcement, the director-producer had shared that he will be announcing details regarding three new ‘members’ to his ‘family of storytelling.

The same was done by Karan a decade ago when he launched three young talents- Alia Bhatt, Varun Dhawan and Sidharth Malhotra. With the intensity and vibes that everyone gets from the posters of Bedhadak, fans are sure that history is going to repeat itself and they can’t wait to witness it. 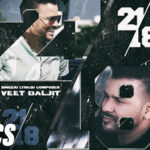