Jenny Johal is a professional Punjabi singer who is very well focused and dedicated towards her singing. She started singing at the age of 4 years and since then she has consistently worked on herself. She earned her fame from her super hit debut song “Yaari Jatti Di”.

The very talented singer Jenny Johal was launched in this Punjabi Industry by none other than Bunty Bains and she gives all the credit to him for making her name in the industry. The two of them have collaborated for many songs together like Pind.

In an interview, when she was asked about her interest in films and if any director has approached her for a film, she answered that “Many directors have offered me films and Vaisakhi List was the first amongst them but she did not accept the proposal as Bunty Bains suggested her to focus on her singing first”.

Reportedly, it was because of the advice from Bunty, that Jenny declined the offer for the Vaisakhi List and thought that it was wise to focus on her singing first and then take a step further in the industry. 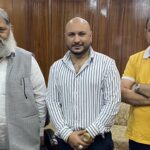