Prominent Punjabi singer Afsana Khan always impresses her fans with her amazing voice. The songs she sings, in no time, manage to hit the music charts. Now again the singer is all set to rock our playlist with her upcoming song ‘Na Maar’ which will be featuring Karan Kundra and Shraddha Arya.

Along with Afsana a Khan, both artists have also shared a poster of the upcoming song on their social media accounts. Afsana Khan is often known for her heart touching songs and even looking at the poster of this song, it seems to be a sad-romantic one.

Today the team of Na Maar has shared a clip which illustrates the name of team members as well as reveals the releasing date of the official teaser. The teaser will be released on 26th August.

Take a look at the clip:

Coming to the credits, the lyrics are penned by The Ruff to which the music is given by Vipul Kapoor and the video is directed by Rav Dhillon. Afsana Khan’s song ‘Na Maar’ will be released soon under Benchmark Entertainment.

Fans are eagerly waiting to see such a big collaboration. Not only this, fans are sure that once again Afsana Khan will leave us teary-eyed. 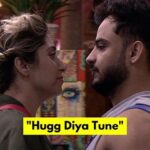