Though the Eknath Shinde camp won the political battle in Maharashtra, the legal battle still awaits. On Monday, the Supreme Court ordered the speaker of the Maharashtra assembly to not to take any acty on disqualification of Shiv Sena MLAs belonging to Uddhav Thackeray group.

While directing the speaker, the Supreme Court also stated that the matter would need to be listed after a bench was formed and would take some time. Tomorrow there won’t be a listing. Senior advocate and Rajya Sabha MP Kapil Sibal, appearing on behalf of Uddhav camp, urged for urgent listing, adding that the speaker has kept the disqualification matter for hearing tomorrow.

“The petitions were scheduled to be listed on July 11 by the court,” I request that there should be no disqualification until this case has been resolved, Sibal said, adding that the top court has previously defended the dissident MLAs.

The Supreme Court asked the attorney general who was appearing on behalf of the governor of Maharashtra, to inform the newly chosen assembly speaker about today’s directions. The Thackeray camp has also challenged the validity of the proceedings held on July 3 and July 4 in Maharashtra assembly where a new speaker was elected and the Shinde camp won the vote of trust.

Though the political battle went in favour of Eknath Shinde camp, but this legal battle and the SC’s direction to hold the disqualification of the MLAs, has relieved the Uddhav camp for now. 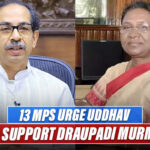