‘Jee Karda’ singer Mehar Vaani has made her name in the industry with her unique voice and amazing songs. The singer has many songs in her kitty like Shining Koka, Pachtayian and Casually. Now the singer is all set to add one more feather in her hat. Mehar took to Instagram and posted a video.

The video features Amrit Maan and Desi Crew’s Satpal Malhi. In the video she is conversing with both the artists, they are enlightening that not one but many songs are coming on the way. Their songs will be released under Desi Crew music production as seen in her video. It will be a collaboration of both Mehar Vaani and Amrit Maan.

Take a look at the video shared by singer Mehar Vaani:

Recently, Mehar Vaani has released her song ‘Shining Koka’ with Dilpreet Dhillon. The song has made a space on the Internet and is liked by the audience. 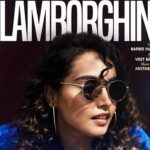