Indian Youtuber Amit Bhadana has successfully made a huge fan base for himself through his comedy videos on Youtube. He has recently made his fans excited as he has announced his upcoming song, ‘Father Saab’, in collaboration with singer and lyricist King. The singer got fame from the show ‘Hustle’ and since then there’s been no turning back for him.

The team of ‘Father Saab’ took to their official Instagram handle in order to announce the same. In the poster you can see a father, played by the veteran punjabi actor, Shavinder Mahal and son which is portrayed by Amit Bhadana.On the poster, it has mentioned that the song is sung by King and also King has given the lyrics. The story that will be depicted in the song will be by Amit Bhadana and the video is directed by Teji Sandhu.

While sharing the poster, director Teji Sandhu expressed his feelings about the project, which says, “I don’t have words to write about this video”.

Take a glance at the poster shared by Amit Bhadana:

Father Saab will be released on 25th July at 11 in the morning and seems to be heartwarming. Just as the team shared the poster and announced the song on the internet, the news went viral in no time. 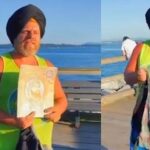 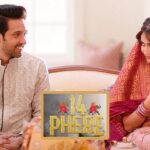