Do you remember when Diljit Dosanjh made it to feature on the cover page of Vogue Magazines? He featured with Kareena Kapoor Khan, Natasha Poonawala and Karan Johar in June 2019.

But do you know the story behind that perfect looking cover picture?

Diljit revealed that when they reached for the photoshoot, it took them more than 700-800 clicks to make it to the final clicks. Yes 700-800 clicks, and that’s a huge number.

Diljit also revealed that he was completely bored by the time they clicked their final picture. This means the picture we saw on the Vogue cover was not Diljit’s 100%, because he was tired and bored by then.

This incident undoubtedly is funny but equally surprising too. Posing for 800 clicks is not an easy task. And guess what? Such tasks are part of their daily job.

We must say the lives of celebrities are not as easy as we think. It might look fascinating from outside, but inside it demands a lot of hard work.

By the way, do you think you can pose for such a long period or time or 800 clicks to be exact?

Also Read: Did Himmat Sandhu Get Engaged Recently? Pictures Inside 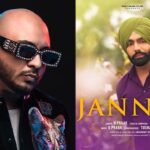