Love Stories are common, relationships are even more common, but stepping forward together is something not so easy. But the love story of Ninja and Jasmeet will prove that not every relationship is fake, because there are a few which are meant for lifetime.

In Sonam Bajwa’s show “Dil Diyan Gallan” Ninja talked about his feelings and he also revealed that he was not the one who proposed to his girlfriend. In fact it was Jasmeet, who proposed Ninja that too on text messages.

Just like us, even Sonan didn’t believe what Ninja said, that is why Ninja made her has a short conversation with Jasmeet on a phone call. Then Jasmeet herself confessed that she actually was the one who proposed Ninja. Ninja was his teacher who used to train her team for bhangra/gidda competitions. Jasmeet said what she loved the most about Ninja was his attitude and his respectful behavior. She fell in love with him and decided to propose to him through messages. She wrote “I LOVE You” in different texts so that he can understand what her true feelings are.

This is definitely a story which deserves an “aww” comment. The host, Sonam was also impressed knowing this story and expressed her wish to meet Jasmeet. 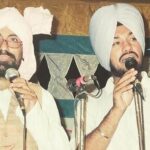